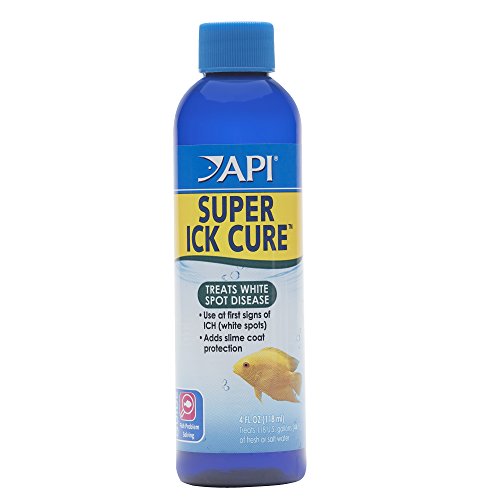 API Super Ick Cure is used for treatment of fresh water ich and eradication of a wide variety of other fresh water parasites including Oodinium, Trichodina and Chilodonella.

Ich is a highly communicable parasite that attacks fish. Ich infestation manifests as white spots on the fins, eyes and body characteristic of the white spot disease. The earliest sign of ich manifestation can be evidenced by fish scratching against the aquarium gravel.

​If left untreated, the parasite causes large wounds on the fish skin that are prone to bacterial and fungal infections.  Furthermore, the fish becomes lethargic, exhibit breathing difficulties and may die.

Add 5ml of Super Ick Cure for every 5 gallons of aquarium water. Administer the same dose after another 48 hours.

If need be, you may repeat the procedure.

According to API, The key to promoting a healthy fish is by creating high quality water and sustaining a healthy aquatic environment.

Below are some other API products we recommend.

Fish Tank Maintenance Tips: Making Sure Your Fish Have A Good Home
Calico Goldfish
Compatible Tank Mates for Your Goldfish
The Wakin Goldfish
Plants For Goldfish Tanks
How To Set Up An Aquarium Correctly
Share
Pin
Tweet
Email