Skip to content
Quick Navigation
Putting Fast Swimmers And Slow Swimmers Together
Too Many Fish In One Tank - Overcrowding
Mating
Disease And Stress
When All Else Fails, Separate!

​Understanding why your fish are picking on each other.

Are your goldfish not getting along?

Bullying and aggression is something that worries every fish-parent because most times, we don’t know how to handle it.

Leaving the fish to “fight it out” is definitely not an option.

We certainly can’t reach right in and separate them like we do our children, although it would be a quick and easy solution!

It helps to understand factors that may be contributing to their grouchy demeanor and how to intervene.

Let’s figure out why you have goldfish aggression, bullying, and rough-housing going on in your tank!

HOW DO YOU KNOW IF THEY ARE PLAYING OR FIGHTING WITH EACH OTHER?

Goldfish are social and enjoy interacting with one another.

However, there are different characteristics to look for when trying to decipher if they are playing or bullying.

WHAT CAUSES GOLDFISH TO BE AGGRESSIVE?

When we think of bullying and aggression, one of the first things that pop into our heads is the playground bully.

You have to wonder why they pick on other kids! Well, it typically comes down to what kind of environment they are being raised in.

In applying that principle to goldfish, there are influences within the tank environment that can provoke aggression and bullying.

Some of which can be prevented.

One of the number one things to prevent aggression and bullying is to use caution in what type of goldfish you put together.

THERE ARE TWO GROUPS OF GOLDFISH THAT SHOULD NEVER BE PLACED TOGETHER.

At feeding times, fast swimmers compete for food almost always leaving little or nothing for the slow swimmers.

Too Many Fish In One Tank - Overcrowding 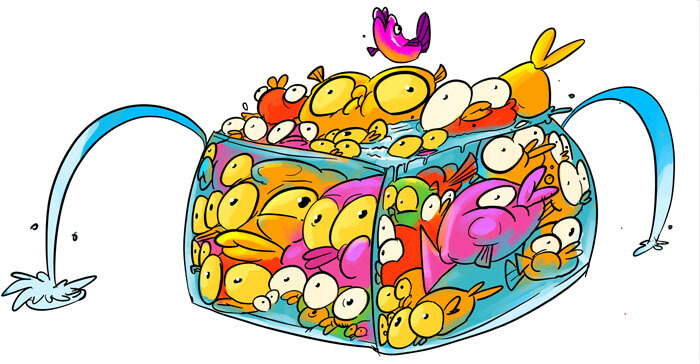 We can only imagine the frustration and stress of living in a one-bedroom apartment with 20 other people!

Now picture that with goldfish.

They are trying to find a solitary and peaceful little piece of real estate within a crowded tank to relax, but there is no such thing.

The stress that overcrowding causes goldfish will cause territorialism and competition for food.

Don’t put too many fish in one tank.

There are guidelines on how many goldfish can adequately go into a tank.

It’s all based on the size the fish will reach as an adult as well as the dimensions and size of the tank.

The mating ritual of goldfish can be quite aggressive and appear as if one is picking on the other.

For those unfamiliar with goldfish mating, it may seem like the mean kid on the block is bullying the nice kid!

The male goldfish continually chases after the female to cause her to lay her eggs.

This game of chase can last a while, so be prepared!

Monitor them to ensure the male is not injuring the female. She can grow weak from the constant quest making her vulnerable to him nipping her on the tail and fins.

In our world, we would have laid those eggs a long time ago to get that bully off our backs! 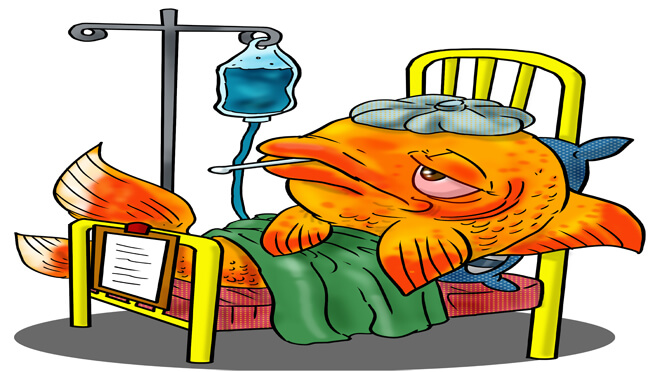 When a goldfish is stressed, it becomes prone to disease. Stressors can be prevented to avoid disease.

However, disease can creep into a healthy tank when introducing a new fish that is diseased.

If you notice a sick fish in your tank, move it over into a hospital tank to prevent the other fish from picking on it.

Read up on goldfish diseases and how to treat accordingly.

STRESSORS (THAT LEAD TO DISEASE)

When All Else Fails, Separate!

If you happen to notice aggressive behavior in your tank, watch the fish carefully to rule out any of the above causes.

There comes a time when you may have no other option but to remove the bully and put it into another tank.

Sometimes you just have to bite the bullet to protect your other fish!

Lice and Worms in Goldfish: All You Need to Know

Where Do Goldfish Come From?