Skip to content
Quick Navigation
What kinds of aquariums are on the market today?
Wall mounted aquariums vs. Standing floor aquariums:
What breeds of goldfish can I own?

Goldfish are some of the most remarkable creatures in the world, although they may not seem like it. They can be trained how to do tricks, push levers for food, tell time, and even remember their owners, tankmates and other information for months!

They are much more enjoyable than some people give them credit for.

However, none of these things are conceivable if they are not adequately cared for, provided an adequate aquarium or if they are living in an inhospitable environment.

It is our duty as their owners to give them a life where they can thrive!

What Kinds Of Aquariums Are On The Market Today?

Aquariums are available in various shapes, sizes and material. 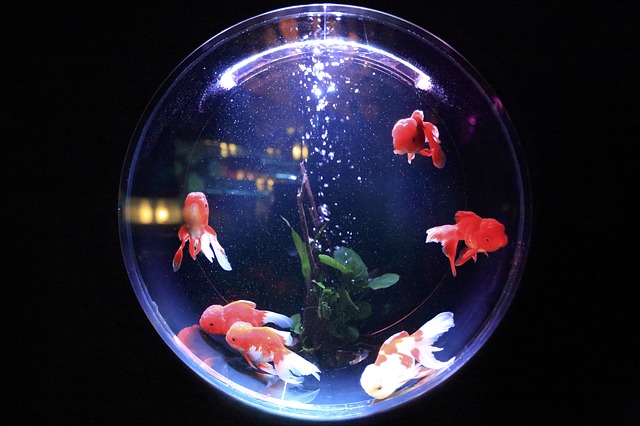 They generally range from the small fish bowl (usually starting at 2.5-gallons) to a much larger aquarium (they can be found up to 210-gallons).

Let’s dive in to the various fish tank sizes and which size is a better fit for you!

Tank Sizes, Shapes and Amount of Fish They Hold

It can be confusing trying to figure out how many goldfish you can safely place into a particular size tank.

The general rule of “one inch of fish per one gallon” typically works.

However, many fail to remember those fish may be 1” at the time, but as they mature, they will grow larger.

This results in an overload of fish waste, less room for the fish, polluted water, stress on the fish, disease, and death.

Important Things to Consider Regarding Stocking a Tank

Goldfish do not thrive unless they are in a group of three or more. They are social fish and need a sense of “community.”

Fancy goldfish not only grow longer, but they grow wider. Dependent upon their length and girth, one fish can easily be considered twice the amount of one fish added to a tank.

Most goldfish are young at the time they are purchased and placed in new tanks. They can grow quite large. Because of this, it’s important to forecast the size of the fish at maturity in the fish-to-gallon ratio.

Example: If you purchase a Fantail goldfish, you must consider their size at maturity.

They grow to at least 6” as adults. In using the “one inch of fish per one gallon” ratio, you should calculate what size tank you will need based on a 6” fish. A 6” goldfish will require 6 gallons of water.

Next, you will determine what size tank to get.

There are no 6-gallon tanks, so you go up to the next available size, which is a 10-gallon tank.

Goldfish that have growths on their heads (hoods) struggle to breathe due to the weight of the hood.

Because of this, they require water that has more surface area for oxygen.

Slow swimming goldfish (fancy) require a tank that has a large footprint.

These types of tanks have large surface areas for them to get air from and to feed. Tanks that are rectangle-shaped are best for fancy goldfish.

Avoid rectangle tanks that have deeper water depths and stick with a shallow depth.

What are the different sizes of tanks?

The “size” of a fish tank refers to how many gallons the tank will hold. Tanks range from small to gigantic aquarium size. A household tank usually runs from 5 gallons to 155 gallons.

Tanks under 10 gallons are generally not used for goldfish because of the lack of inadequate room for the fish. These smaller tanks are consistently used for Bettas.

A 2.5-Gallon aquarium is hardly an “aquarium” at all. These tiny fish bowls are not recommended for goldfish of any size.

In fact, they are hardly suitable for any living thing, the exception being if you were interested in growing a live aquarium plant.

The 5.5-Gallon aquariums are more suitable for fish breeds that must live alone, the Betta Fish is a good example of this.

However, if you are planning to only own a Betta Fish then you should consider buying a larger tank so that he will be healthier, more comfortable, and overall happier. 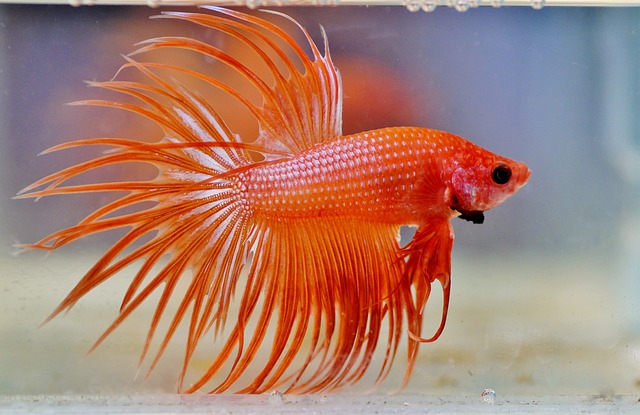 Aquariums that are 10-Gallons to 20-Gallons are recommended as the “starting point” when considering goldfish as pets.

There should never be more than a solitary goldfish in these sizes, and these aquariums are not recommended as long-term homes.

If you only wish to own a single goldfish, and they are still small in size, then, by all means, purchase an aquarium that falls in this category.

However, you should be prepared to buy a larger tank as he grows.

30-Gallon aquariums are an even better option for a single goldfish or for two small goldfish.

While they are small, two goldfish may do well in this size, however, you should be prepared to purchase a more suitable tank.

If you are interested in having happy and healthy goldfish then you should follow this rule of thumb:

Each goldfish requires a minimum of 20-Gallons of water. Following this rule means that two healthy goldfish can live happily in a 40-Gallon aquarium (minimum). 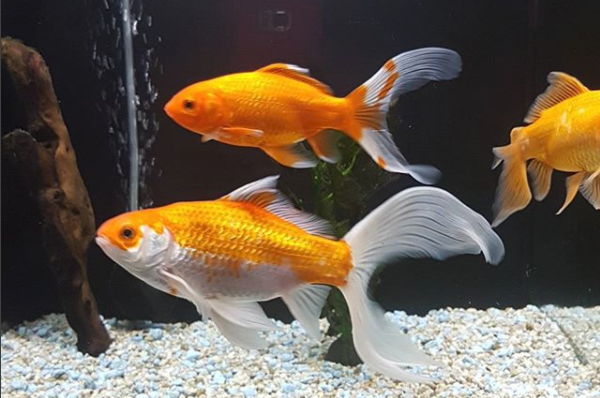 If you are interested in having six to eight goldfish then you should be looking for aquariums in the 120-Gallon and 160-Gallon range.

The extremists that would like a large amount of goldfish and other inhabitants should be seeking a special 210-Gallon aquarium.

When trying to determine which size is right for you, there are multiple factors to consider.

One of which includes how much space do you have for an aquarium.

If you only have room for a 40-Gallon aquarium then do not expect to bring home 10 goldfish.

If you have a large amount of space to work with then you may be able to own more goldfish in a larger tank.

Another factor to consider is what shape you want your aquarium to be.

We give little thought to the shape of a fish tank when we are up close admiring the contents.

Rectangle-shaped tanks are typically the most common shape of tanks used.

Those who desire uniqueness or more dimension opt for other shapes.

Serious fish hobbyists are going to extremes in having custom-shaped tanks designed to house their scaly friends. 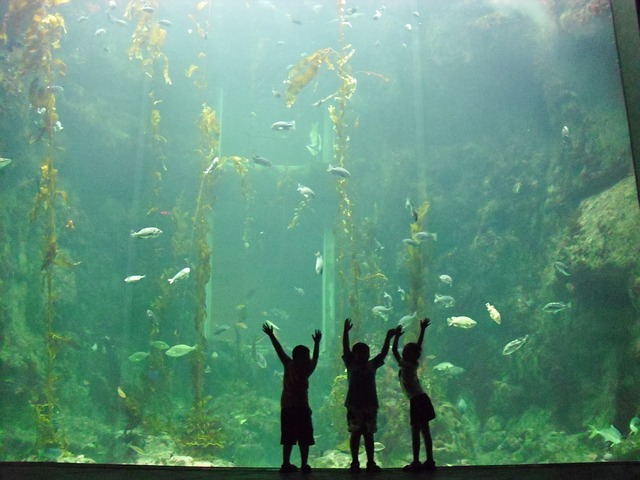 You may be interested in an aquarium that is hexagon shaped simply because it isn’t very common.

However, these tanks can be hazardous to certain goldfish breeds.

These goldfish would be much happier in a rectangle shaped aquarium.

Rectangle shaped aquariums are recommended for goldfish in general because they provide more surface area for swimming, growing as well as more oxygen in the water.

However, if you are dead set on owning a hexagon shaped aquarium and haven’t decided on your goldfish yet then you should steer clear of the delicate fish and check out the hardier goldfish breeds such as the Common Goldfish, the Comet, and the Shubunkin.

These breeds are agile swimmers and have slender bodies that are not as delicate as other goldfish breeds. 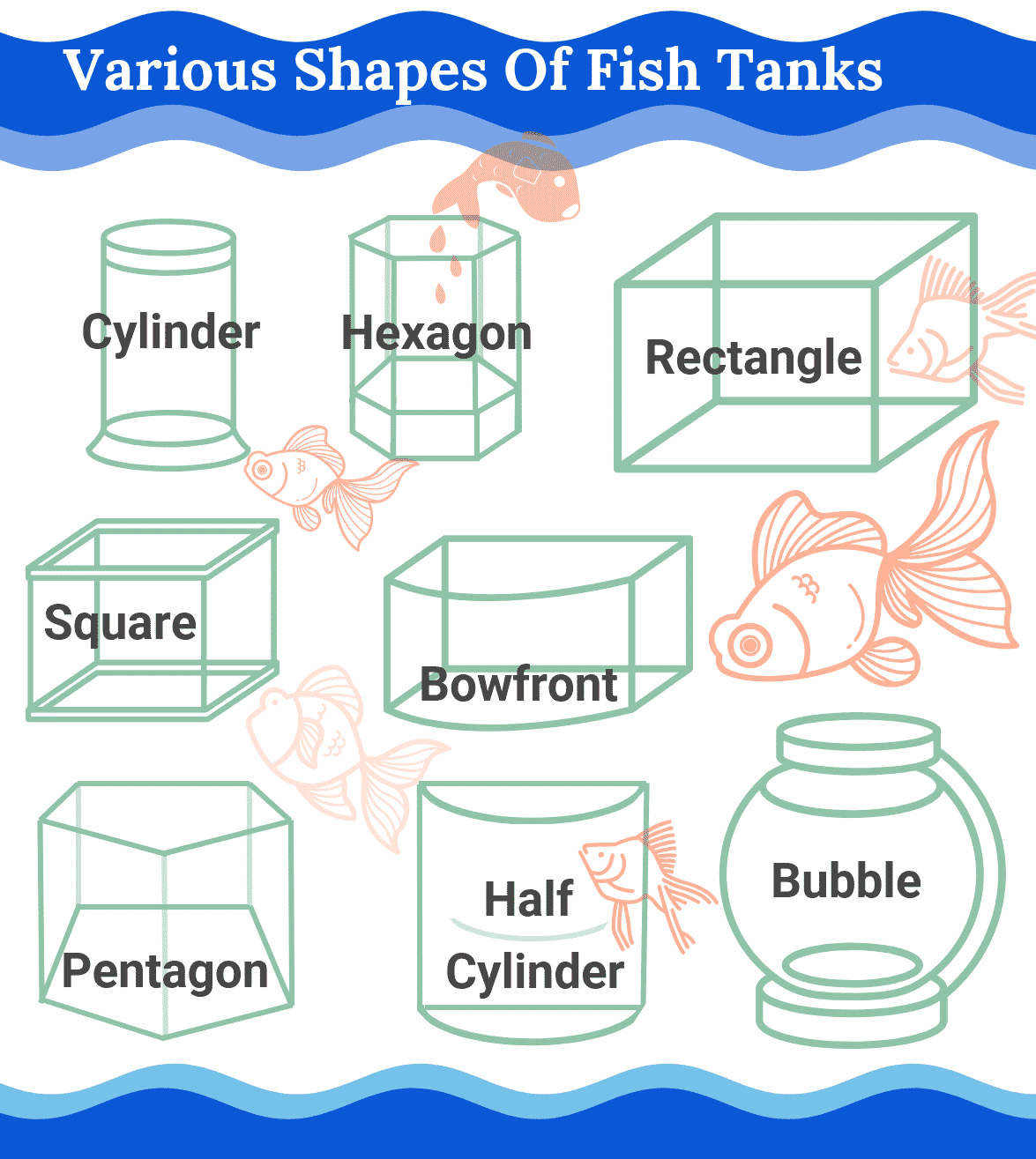 Avoid aquariums that have more height than they have length, especially if you plan on owning goldfish.

Goldfish require surface area as opposed to depth. This is yet another reason to choose an aquarium that is rectangle shaped.

Aquariums can be bought in glass or acrylic.

Glass aquariums are scratch resistant, less expensive, non-porous and will not turn yellow. However, they are considerably heavier.

Acrylic aquariums are lighter, however; they can scratch easily, are more expensive, may distort the visualization, and can become yellow over time.

Wall mounted aquariums are a great option if you are limited with floor space. They are compact, and designed beautifully.

They are also in a perfect location if you are concerned with safety of young children or the elderly.

However, they are much more difficult to clean than aquariums on a stand.

They usually require someone to stand on a stool to clean it and that can be dangerous for the owner and others around them.

These aquariums are usually smaller than stand aquariums and therefore, they can be contaminated quicker (and then needing to be cleaned more often).

Wall mounted tanks can only contain certain species of fish.

Naturally small fish may do well in this design, whereas fish that can grow quite large would not thrive as much. Wall mounted tanks are much more costly.

Floor stand aquariums will use potentially valuable floor space, are not as compact, and are a standard design.

However, they are a better choice for most species of fish because they provide surface area, room to grow, plenty of oxygen and room to swim.

If you are considering owning goldfish then a floor stand aquarium is the way to go.

How many goldfish should I put in a tank?

Again, use the “one inch of fish (inches at maturity) per one gallon.” We have outlined an estimated amount of goldfish that can be placed in each size of tank.

It’s always safer to err on the side of caution by putting less goldfish in a tank than too many.

Overcrowding can be detrimental to your fish and the health of your tank.

The table below should serve as a guideline for how many goldfish you can place in a tank.

For example, you may be wondering what size tank for 2 goldfish. As you can see below you can get 2 common goldfish in a 20 gallon tank.

Fish love their space and space is one of the foundations to a happy fish.

What breeds of goldfish can I own?

There are approximately 125 different goldfish breeds. Only 15 of these fancy goldfish are commonly available here in the United States.

If you are willing to pay the money, then you can technically own any type of goldfish that you desire, as long as you provide the corresponding environment.

The only limitation is whether or not the fish you are interested in are fast swimmers or slow swimmers.

Goldfish are naturally docile creatures and are hardly ever aggressive unless they feel highly threatened.

However, feeding time becomes a great competition between the fast and slow swimmers.

This is a competition that slow swimmers will never win. Therefore, choose similar swimmers for your tank.

If you are interested in slender goldfish such as the Comet, then you can include Shubunkin Goldfish, Common goldfish, and other Comets in the aquarium.

If you take an interest in the Ranchu Goldfish, then you should consider the Lionhead, Oranda, Pearlscale or other “handicapped” goldfish.

This will ensure that there is little to no competition during feeding time.

What The World Would Be Like If Goldfish Did Not Exist

The Lifespan of a Goldfish