Are you looking for a fancy goldfish breed? The lionhead goldfish is a form of a fancy goldfish which is bred in China and developed to resemble the mythical Chinese lion-dog.

This breed of fish has a distinctive red colored headgear.

While some fish from this breed has an abundance of growth,  others don’t have much of it.

In this article, we will introduce you to the lionhead goldfish breed in detail and give you as much detail about this fancy breed of fish as we can.

The Physical Features of the Lionhead Goldfish

The most distinctive feature of the lionhead Goldfish is the red colored headgear.

The dorsal-less goldfish has a hooded head and doesn’t support a curved back like most fancy varieties do. The Lionhead Goldfish has a more rounded or egg-shaped body unlike the Shubunkins and the Common Goldfish that have a  long, slender body.

This variety of Goldfish was bred in China to have a "hood" which somewhat depicts the image of a mythical Chinese lion-dog.

The distinctive lion's mane or raspberry appearance of the this is the reason for the fish’s common name 'Lionhead' Goldfish.

The actual amount of head growth differs for each individual fish.

For some fish, the broad head, except for its mouth, eyes, and nostrils, can get covered completely with this fleshy growth.

In some cases, this can sometimes even impede the fish’s vision. For others, there may be hardly any head growth at all. This variety of fish is similar to the Ranchu Goldfish which was a variant developed in Japan.

However, the Lionhead's back has a less curved shape. The fish has looks similar to the Fantail Goldfish in due to its caudal fin as well.

There is also a long-finned Lionhead variety which is pretty rare.

The Lionhead Goldfish is a rather delicate fish so, it is not a good choice for beginners. 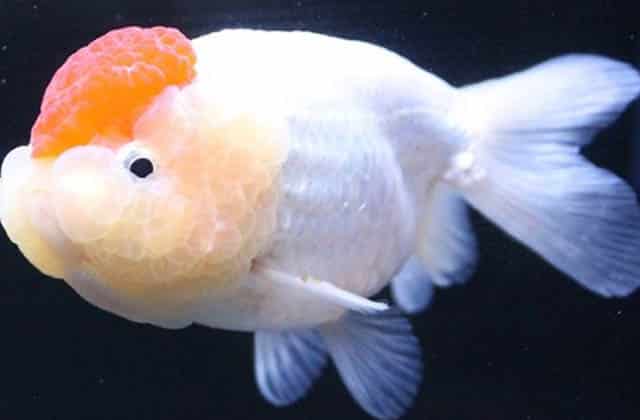 The fish’s swimming ability is obstructed by the fish’s rounded body and is then further diminished a the lack of a stabilizing dorsal fin. 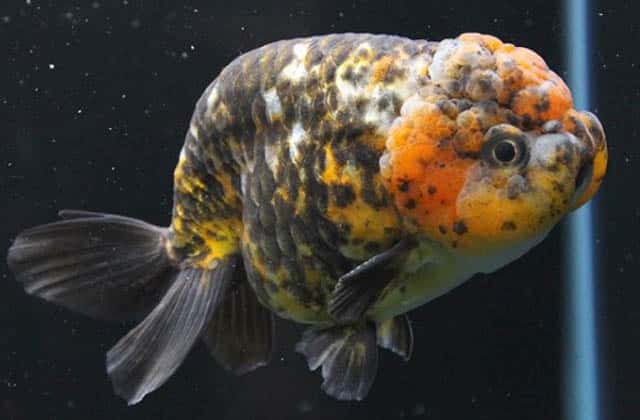 The red-capped variety of this fish has a white body and a bright red head.

The Standard for the Lionhead Goldfish

Following is the lionhead standard:

Depth of body should be approximately 60% of body length.

Hood should be well-developed

Minimum length of body to be 2 inches or about 5.5 cm

The Lionhead goldfish must be alert and bright. 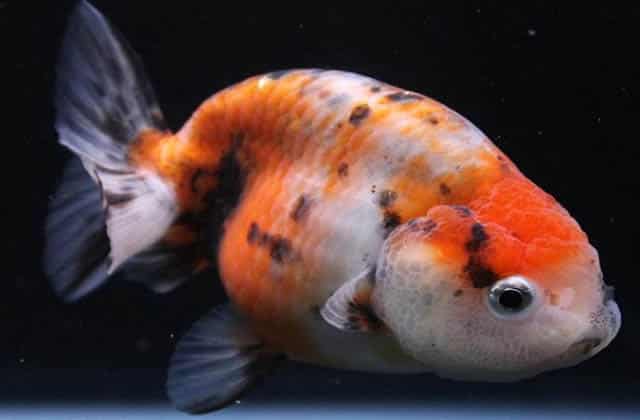 The body of this fish should be medium in length and it should have smooth contours and no sign of a dorsal fin.

The caudal fin should usually be divided, forked and held above the horizontal.

The fish’s hood must be well-developed all three areas which is the infra-orbital, opercular, and the cranial.

Metallic fish may be self-coloured or variegated in a pleasing pattern similar on both sides.

It is important to note that quality fish will have high colour intensity and metallic shine extending to its fins as well.

Habitat and Background of the Lionhead Goldfish

The goldfish that you find in aquariums today are actually the descendants of a species of wild carp known as the Prussian Carp, Gibel Carp, or Silver Prussian carp, Carassius gibelio. 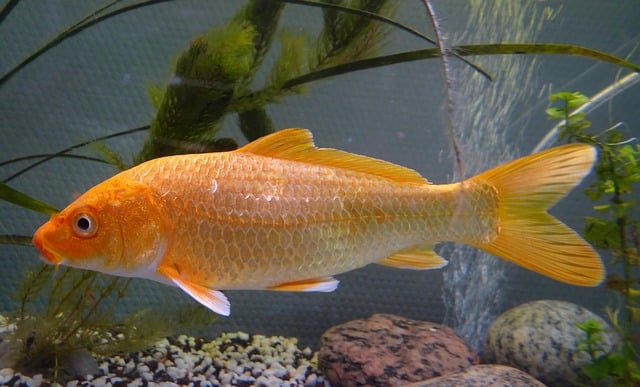 The species was described by Bloch in 1782 and the breed originated in Asia---Central Asia to be exact.

The fish were known to inhabit the slow moving and stagnant waters of lakes, rivers, ponds, and ditches.

They fed on detritus, plants, small crustaceans, as well as insects.

The modern-day Goldfish were originally developed in China and by the 1500s, they were traded to Japan.

Majority of the fancy goldfish were developed by Asian breeders. 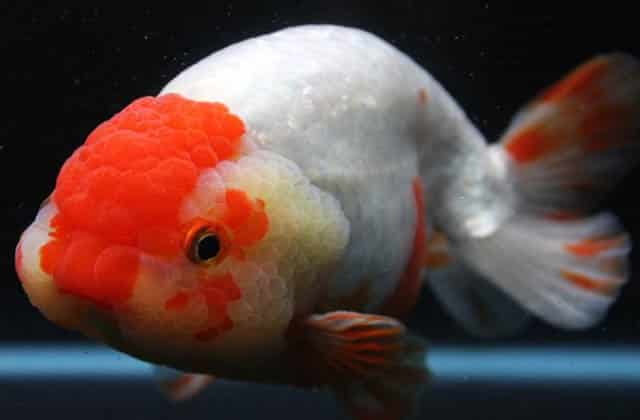 These fish come in wonderful colors and shapes. Today, the domesticated goldfish are distributed worldwide. There are more than 125 captive-bred varieties which have been developed over the centuries.

The Lionhead Goldfish is one of the older varieties of fancy goldfish.

The breed was developed in China to have a "hood" which depicts the image of the mythical Chinese lion-dog.

The fish’s ancestor and precursor is the Eggfish, known as Maruko in Japan.

Social Behaviors and Tankmates for the Lionhead Goldfish

Goldfish are social animals and they prosper in community. 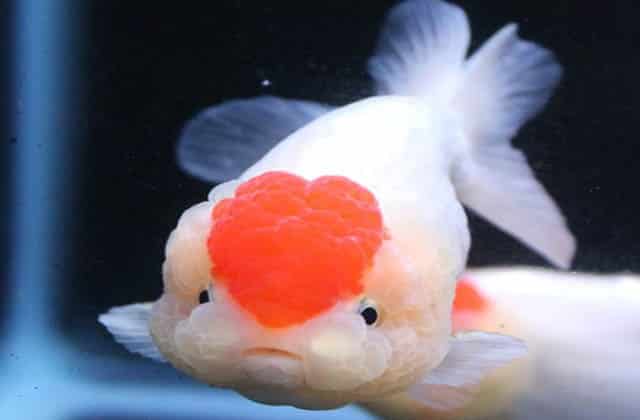 These fish are excellent scavengers as well and adding other scavengers or other bottom feeders to the aquarium isn’t necessary if you have goldfish around.

It is important to keep in mind the physical traits of the Lionhead Goldfish when you’re choosing tankmates for the fish.

Like the Celestial or the Telescope Goldfish, the Lionhead may be visually challenged because of its growth. 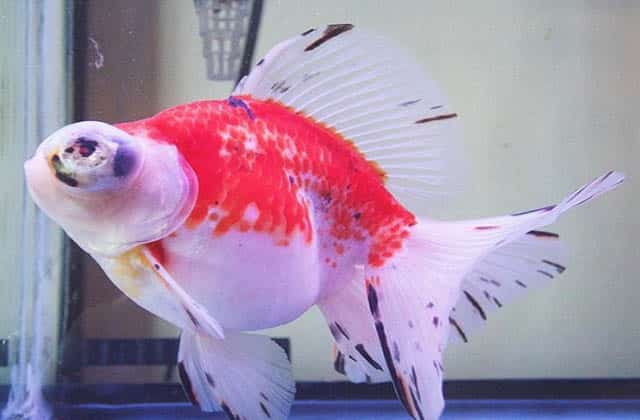 It is also important to note that the fish’s swimming abilities may be hindered due to its rounded body.

The fish also lacks a stabilizing dorsal fin which is something that can be seen in the Bubble Eye Goldfish as well.

Keep in mind that the Lionhead Goldfish can’t readily compete for food with other fast-swimming goldfish.

However, the varieties with similar physical traits and restrictions can make excellent tankmates for the Lionhead.

The Lionhead Goldfish is a unique and exotic variety of the Goldfish which finds its origins in China. 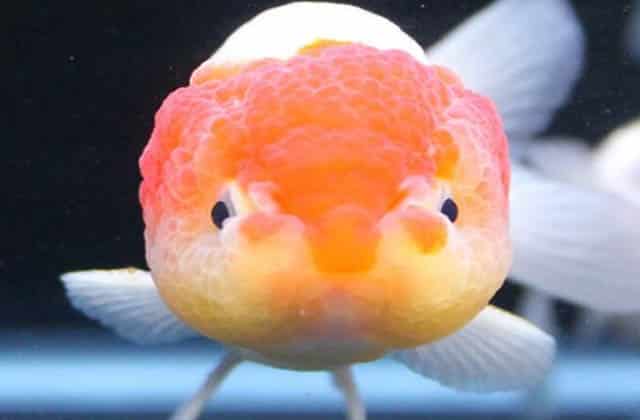 This breed of fish has a distinctive red colored headgear which was developed so that the fish looked similar to the mythical Chinese lion-dog.

The Lionhead Goldfish has a more rounded or egg-shaped body unlike the Shubunkins and the Common Goldfish that have a  long, slender body.

The distinctive lion's mane or raspberry appearance of the this is the reason for the fish’s common name 'Lionhead' Goldfish. 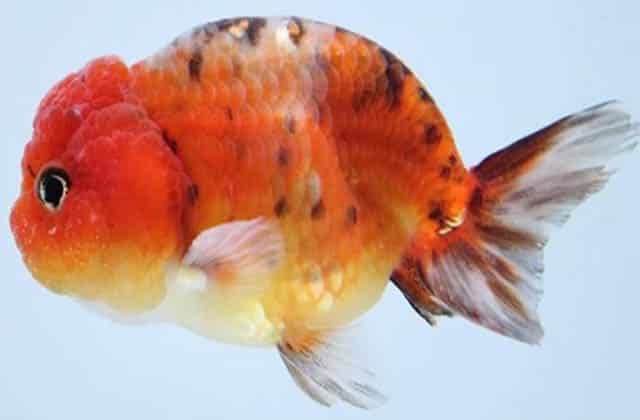 These fish are excellent scavengers as well and adding other scavengers or other bottom feeders to the aquarium isn’t necessary if you have goldfish around.

Do you have questions? If so, you can leave them in the comments section, and we will get back to you as soon as possible. What is a Lionhead goldfish?

What does a Lionhead goldfish cost?

What are compatible tank mates for Lionhead goldfish?

How large does a Lionhead goldfish get?

What is the lifespan of Lionhead goldfish?

What does a Lionhead goldfish eat?

What size tank does a Lionhead goldfish need?

What should the water temperature be for a Lionhead goldfish; and do I need to have a heater for the tank?

Do I need to have an air stone (air pump) in my Lionhead goldfish’s tank?

Does a Lionhead goldfish’s tank require a filtration system?