Also known as the Shubunkin Goldfish, the calico coloring is exclusive to this particular breed of fancy goldfish. 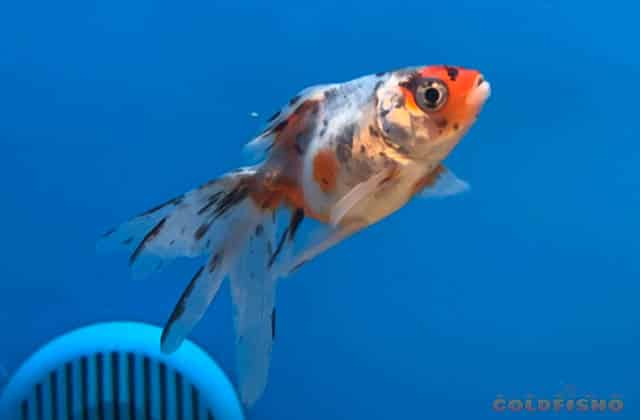 The Shubunkin can have many colors in its coat which is why it has been called the Calico Goldfish.

It comes in yellows, reds, oranges, greys, whites and blacks which are all set on a blue background.

This blue background is very rare and makes the Calico a very expensive fish.

This breed of goldfish is the hardiest and so it is recommended for beginner owners.

They are very easy to keep and they will eat anything offered to them. They are very social, active fish that thrive in communities.

Because they are so easy to keep, they are perfect for ponds so long as they are kept safe. 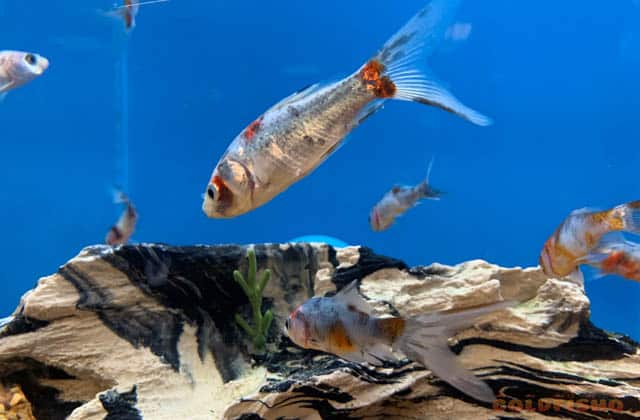 Although goldfish were originally developed in China, around the 1900s, Japan further developed the Calico goldfish.

The body of the Calico is elongated, with a flat body. The head is wide, but short and the body should taper smoothly from its back and belly all the way to the base of the tail fin, which should be forked.

The calico’s fins should stand full erect with the edge of the dorsal fin slightly concave.

The average lifespan of the Calico is about 10-15 years, but with care they can live up to 20. While the Shubunkin is small than the common goldfish, the environment its kept in can seriously inhibit its growth.

It needs to be kept in at least a 15-gallon tank with a few other fish. This will ensure that it grows to at least 5 inches. 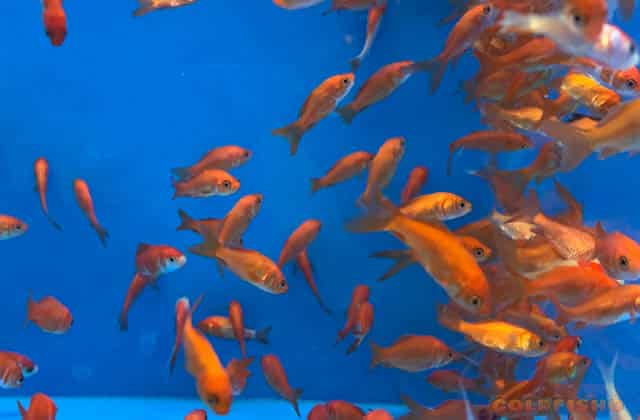 The bigger the tank and the less fish contained inside it, will allow the fish to grow even bigger.

They have been known to get as large as thirteen to eighteen inches.

Feeding your Calico goldfish will be fairly easy. They like to eat all kinds of fresh, flake or frozen foods.

You will want to keep a good balance of food for them, starting with a high quality flake food every day.

"We recommend the Tetra Fin Goldfish Flakes. High quality and perfect for your Calico Goldfish." 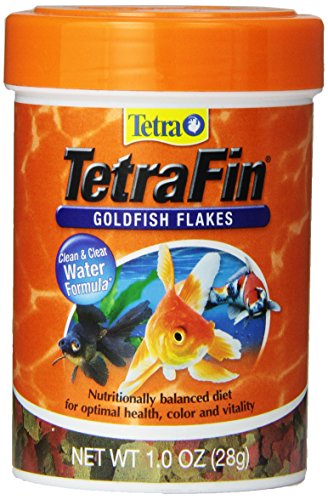 Brine shrimp, blood worms, tubifex worms and Daphnia should be fed freeze-dried to ward off any parasite or bacterial infections.

Like other goldfish, they also appreciate the occasional treat of fruits and vegetables, so long as you take care with how much at one time you feed them.

Add in small amounts at first to see if it suits their tastes, then you can add in a little bit more.

You want to make sure that they will consume any feed given to them within about twenty minutes.

So on to the tank. It is best to provide a lot of surface for the tank rather than height.

The more surface, the better filtered the tank will be and the cleaner it will stay.

The gallon size of the tank? Well, for juvenile fish, you want one gallon per one inch of fish. However, once the fish become adults, you’ll want to rethink that figuring.

Because adult fish consume more oxygen over all, it’s best to keep it to one gallon per half inch of gold fish.

If you want to keep more fish, the best way is to either buy additional tanks with fewer fish in them, or buy a really big tank and keep just a few more fish in that one.

The temperature of the tank should fall somewhere between 65-72 degrees F.

A quick or sudden drop in temperature can kill your fish. If you live in an area that changes rapidly from hot to cold, you will want to provide a heater in your fish tank.

Your Calico goldfish likes to live in a community setting, so providing a larger tank with a few more fish might be the way to go.

Make sure that the fish you put in are similar to your calico goldfish. You don’t want to add an aggressive fish in because the calicos are so laid back. 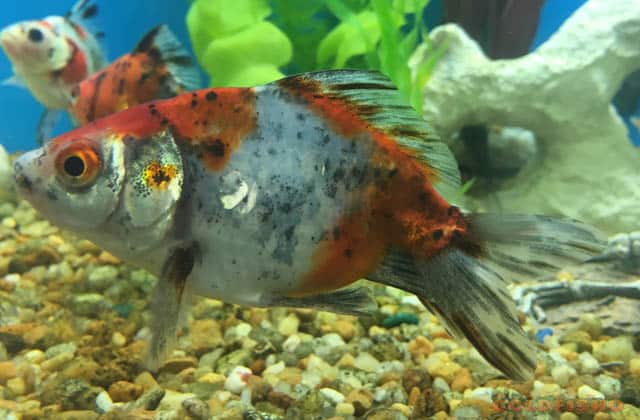 They also like to scavenge, so any food missed at feeding time, will likely be picked up later in the day.

In this regard, it’s not entirely necessary to keep a bottom feeder in the tank.

If you choose to breed your Calico goldfish, make sure you have the time and a proper set up. You will need two separate tanks.

For breeding you will want at least a twenty-gallon size as one fish can produce up to 10,000 eggs in a spawn. 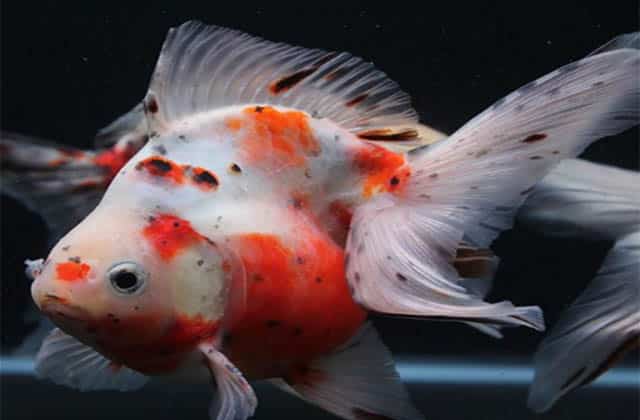 It’s best to have at least 2 female fish to start with and one male to fertilize the eggs. Set it up as closely resembling what they would find in nature.

You’ll want a decent traditional colored gravel in the bottom, some plants that the eggs can attach to and plenty of room.

The plants don’t have to be alive, you can use silk. Start the tank off at about 72 degrees, just like normal.

Add your breeding fish in. Give them a couple of days to acclimate to the new surroundings.

Then you can lower the temperature in the tank over several days to 60 degrees. Then gradually raise it up again to about 68 degrees. 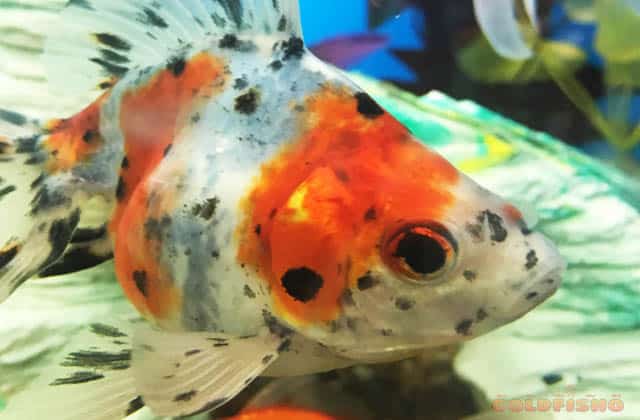 This induces spawning and gets the best outcome of eggs to be fertilized. You will notice your male fish swimming at the females, gently pushing them up against the sides of the tank or plants.

They are encouraging the girls to release their eggs, so that they can be fertilized. The eggs will attach themselves to the plants around the tank.

Once all spawning of eggs is complete, remove your breeding fish so they don’t consume any of the eggs.

Spawning usually only takes two or three hours, so watch closely. The fertilized eggs will take four to seven days to hatch.

Once hatched they can live on their feed sac another 24 hours until you need to feed them. Remove any eggs that did not hatch so they don’t rot in the tank. 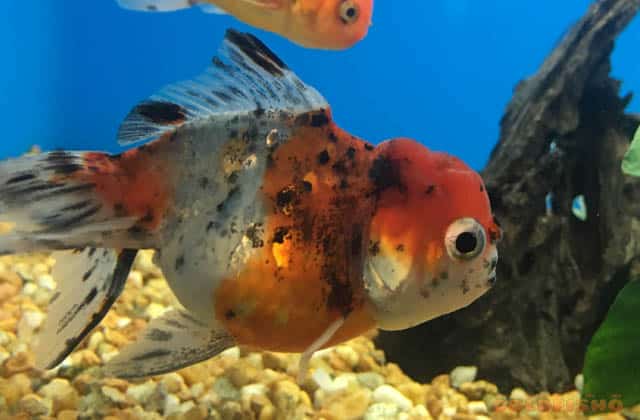 Once the sac has been absorbed by the new fry, it’s time for you to feed them. Best to use a freeze-dried baby fry food to start, and graduate up to the next as they get older.

They will stay a darker brown color for several days to hide from predators and within a few months, they will gain their adult coloration.

A Quick Look at Some Awesome Goldfish Tattoos!
Types Of Goldfish Tank Filters
What The World Would Be Like If Goldfish Did Not Exist
How To Set Up An Aquarium Correctly
Do Goldfish Eat Snails?
Goldfish Food Reviews
Share
Pin
Tweet
Email