Goldfish may be known as one of the low-maintenance pet choices, but they can get sick just like your pooch. In fact, goldfish can be prone to various diseases and illnesses depending on their breed, age, as well as how well they are cared for by their owners. One of these potential developments is called Black Smudge, or Black Spots.

What is Black Smudge?

Black Smudge is also commonly known as Black Spots. This is a condition that could have any number of causes. However, it is a relatively common symptom in goldfish. The appearance of sudden black spots on your goldfish could be an indicator of an underlying condition that should be researched and addressed. If your goldfish starts to develop dark black spots in various areas of his fins, tail, or scales, then this is an obvious way to see that he has Black Smudge (Black Spot). These black smudges may appear as sudden as overnight. Now, not every goldfish that you see with black spots should be diagnosed with Black Smudge. There are breeds of goldfish that can come in a color and pattern known as Panda, which is a black and white goldfish design. Some other colored goldfish may also be spotted with brown or black spots. Black Smudge is the development of dark areas of the goldfish where there previously wasn’t any.

Black Smudge or Black Spots can develop due to any number of problems. We may not even understand or are aware of all of the potential causes yet. However, there are a couple of common reasons that you could check for and potentially rule out when attempting to diagnose and treat your goldfish with black spots.

One common cause is the development of parasites in the aquarium. Certain tankmates such as snails may bring parasites into the tank, infecting its inhabitants. Goldfish that live in outdoor ponds are highly susceptible to parasites due to their vast open environment. If you believe your fish may have a parasite that is causing their black spots, then you should consider contacting a goldfish specialist or a veterinarian for a proper diagnosis and treatment plan.

Another common cause of black smudge is actually a good reason. Some goldfish will develop dark brown or black smudges (spots) when their scales and bodies are healing after being injured. They may form “healing” black smudge if they have been roughly handled if their tank water has a low pH, Goldfish ICH or even skin flukes.

Finally, if the ammonia levels in the tank water are too high, then this could cause your goldfish to become injured and ill. Thus, causing black smudges or black spots to appear.

How can Black Smudge be prevented and treated?

Treatment will depend on the cause, of course. If your goldfish have developed black smudge due to parasites in the aquarium, then the best course of treatment would be to purchase an anti-parasitic water treatment. Follow the directions closely and consult a goldfish specialist or a veterinarian if you are unsure. If the cause for the black smudge or black spots is healing after an injury or illness, then you may not need to treat it at all. The spots have formed because your fish is healing and therefore the cause has already been taken care of. However, if neither of these potential causes seems to be the diagnosis, then you may want to try testing the ammonia levels of the tank water. If the ammonia levels are high, then you will need to perform a water change and do everything possible to reduce the ammonia levels. In order to prevent your fish from developing black smudges, you should avoid snails in the tank, test the water regularly, and perform water change every other week. Keeping your goldfish happy and healthy should be a priority! 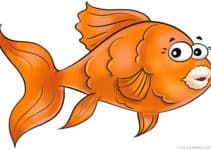 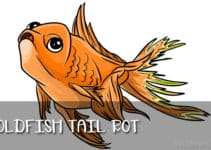